Dr J.Joseph Thas is delivering a lecture on Siddha Medicine and Skin Diseases in the forenoon of 23rd July2005 at the AYUSH 2005 Exposition in the MADITSSA Auditorium at Madurai.

*A  specialist in Allopathy and Siddha Medicine

*Photographs by the author

India today leads the world with its largest number of diabetic subjects in any given country .It is said that presently 33 million Indians are   diabetics and these numbers are likely to increase to 57.2 million by the year 2025.This will be one sixth of the world total diabetics.India is already the diabetes capital of the world.

Among the several chronic complications of uncontrolled diabetes foot ulcer is one. Diabetes is the leading cause of non traumatic lower extremity amputation in developed countries .It is mentioned by specialists that 20 out of 100 diabetic Indians undergo lower limb amputation. The cost of each amputation could be between Rs 50000 to Rs 1 lakh.

Indian diabetologists believe that the fundamental principle in foot salvaging is early conservative amputation and radiacal debridement of diabetic foot ulcer .So it is believed that a patient with diabetic ulcer will have to undergo amputation at some time or other.

.A variety of external and internal  drug preparations are mentioned in ancient  Siddha literature to treat chronic ulcers including diabetic ulcers.  So far there is no research report regarding their use in actual practice. From the authors experience it is firmly believed that Siddha Medicine can be utilized to  treat chronic diabetic ulcers  with great success.

The author, a specialist in modern medicine and Siddha is using a few of these ancient Siddha procedures in treating chronic diabetic ulcer.   The author uses a few Kara cheelai [medicated gauze] ointments and thailam [oil] preparations for dressing these chronic ulcers.  The patients who come to the author  are already under insulin and   antibiotics as prescribed by their respective diabetologists or physicians. Invariably the author used to supplement the allopathic measures with a few oral Siddha preparations such as Kungilia parpam. The ingredient of this formulation is the gum of Shorea robusta processed in tender coconut water. This Siddha  drug is attributed with the property of healing internal wounds.   The author  also uses a few Kudineer [herbal decoctions] to improve blood circulation and hasten the healing process.

Some typical case studies by the author will reveal how certain surgical procedures mentioned in Siddha are still useful and relevant in curing chronic diabetic ulcer.

A 65 years old man affected with leprosy as well as diabetes for several years had developed a deep perforating ulcer in one of his soles. With full allopathic treatment including insulin and higher antibiotics the ulcer did not heal for many months.  He came to the author.  The ulcer was dressed with Pachai Ennai    an external oil preparation in Siddha and manjal kara cheelai. With in a week the ulcer became clean and under aseptic condition it was closed with silk sutures.  The same oil was used for further dressing. Astonishingly the ulcer healed with in two months. Other than Siddha dressing and some herbal drugs mentioned previously the patient continued his insulin and antibiotics as was advised by his physician under allopathic treatment as he had been before.

The ulcer became clean and was closed with silk sutures

Several drugs are mentioned in Siddha literature to treat puzhu pun meaning worm infested ulcer.   Modern surgery texts do not explain such ulcers any more as they have become rare rare in   developed countries.

A 75 years old diabetic man came to the author with complaints of boring pain in his right big toe and sleepless nights for about a week. The patient was not aware that he had several worms eating his flesh.On examination the author

found and removed 30 maggots   from his big toe.  The maggots had made several furrows in his toe. Pachai ennnai and Pachai kara cheelai [green corrosive gauze] were extensively used in this patient and his limb was saved. 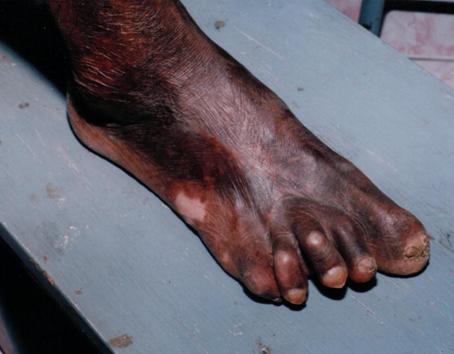 .With proper research and development Siddha can be utilised to save several diabetic limbs. The treatment with Siddha is harmless,economical,effective and achieves results which otherwise is not possible with modern medicine alone.